Designed in 1969 in New York City, the LOVE bracelet was the creation of young Italian jewelry designer Aldo Cipullo.

Inspired by the chastity belt and the idea that symbols of love should be everlasting, the bracelet’s unique charm lies in its locking mechanism.

According to the designer, « What modern people want are love symbols that look semi-permanent — or, at least, require a trick to remove »

Seen on many celebrities, the LOVE bracelet quickly became a status symbol in the 70’s.

However, this cult item could have stay locked in a romantic symbolism. Thanks to its winning design, it recently became the hottest piece of status jewelry for millenials. 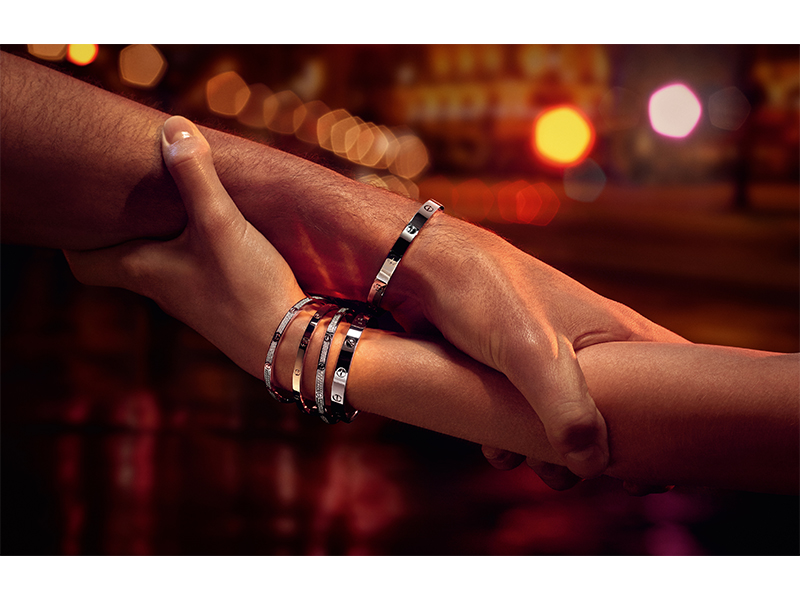 Picked up by a new generation of beautiful people, this statement bangle appeals the younger consumers who want to invest in a timeless and wolrdwide known piece.

The craze that currently surrounds them isn’t going to stop as Cartier has released a new version of the bangle in January.

In its orginal design, the two C-shaped halves unhinge to clasp together before being screwed on with a miniature screwdriver included with each bracelet.

Innovations were necessary to keep the icon moving. The new LOVE bracelet is easier to remove as it opens now on one side only, allowing it to be switched quickly (and without someone’s help).

The latest addition to the Love Family, due to its slimmer proportions, fits perfectly the new trend for stacking the bangles.
The story of iconic bracelets goes on as Cartier is just going to launch this month the new ECROU.

Available in white or pink gold, this new minimalist design will surely become a must-have.

Weither you are a man or a woman, a fashion enthousiast or a minimalist lover, the Cartier’s iconic bracelets are definitly the fine jewelry pieces that everyone dream to have in its collection.