What links Fabergé to Gemfields? Besides the fact that the jewelry brand is now provided with the best natural colored gemstones in the world…nothing ! What a wonderful story with upcoming developements … we are all waiting for !

Similar to all great love stories – the romance between the world’s largest rough emerald producer and one of Europe’s oldest jewelry houses is a tumultuous one, filled with ups and downs, but ultimately one that inspires the imagination.

When the two came together in a creative collaboration of new dimension almost two years ago, the world was waiting with bated breath to see what creative masterpiece will come from the combination of their artisan and legacy powers.

As a reminder, the House of Fabergé was acquired  by the Gemfields mine company at the end of 2012. In an interview they gave to the telegraph,  Gemfields said that they planned to create a “globally recognised coloured gemstone champion”, building on Fabergé’s status as a “global brand with an exceptional heritage”

With the emerald market growing in value, Gemfields were right to seek out Fabergé’s historic craftsmanship and profound know-how in jewelry-making as their most strategic move towards diversification. Colored gemstones have always captivated the hearts and minds of people and the interest in them has exponentially grown in recent years, paving the way for a strategic entry on the scene for a company of Gemfields’ stature. But it is the unique heritage of the renowned jewelrer to the Russian tzars, its history of excellence and a commitment to coloured gemstone products that can be a powerful catalyst for the brand’s global recognition as a leader on the emerald market.
As one of the world’s most legendary brand names Fabergé has always had a well-documented and globally recognised heritage and standards for beauty and elegance. Gemfields’ acquisition of Fabergé in 2013 aligned the world’s largest coloured gemstone producer with one of the most iconic brands in terms of vision. Coloured gemstones were able to gain a new level of exposure and international presence with the advancement of the “mine and market” principle. 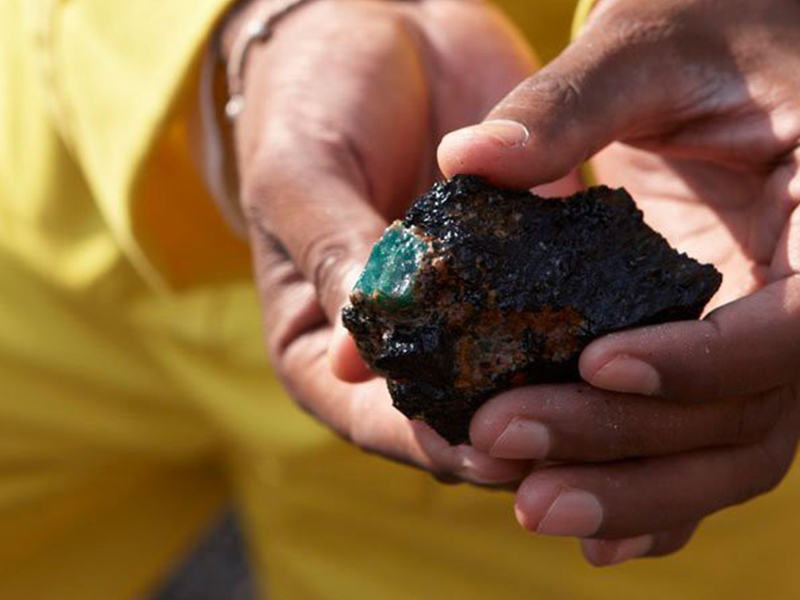 The coming together of these two brands bridged the gap between the “mine and market” segments by giving a seamless continuity between the luxury goods market and the mining of the finest gemstones. By incorporating Gemfields into two of its most profitable segments within the gemstone supply chain Fabergé creates a platform to expand the company’s market share within the coloured gemstone sector, and gains greater influence over product positioning and consumer awareness.
Similarly, Fabergé has brought direct and indirect value to the business of Gemfields as it provides a channel for all those mined gemstones to reach both trade and end customers. It’s a win-win situation for both brands, although the real winners are the fortunate shoppers who get to own a piece of jewelry that incorporates Fabergé’s historic craftsmanship techniques and exquisite standards of beauty with Gemfields’s rare and flawless gemstones – a bespoke masterpiece of form and harmony.
The merger was followed with a highly successful advertising campaign under Gemfields’ ownership, under the name ‘The Art of Colour’. Fabergé’s ‘Emotion’ rings were debuted during this campaign, showcasing pavé-set coloured gemstones that soon became a best-selling design due to their timeless qualities and powerful symbolism. With each ring being unique and superbly crafted, it was nothing short of spectacular that they were set with over 300 coloured gemstones.

We can only guess what the future holds for the two brands but if there is anything that Fabergé has proven over the years – it is that it is not afraid of pushing its creative boundaries further than anything the jewelry world has ever seen. Its recognisable freedom in design and divine symmetry in jewelry pieces has always reflected the artistic use of coloured gemstones as the basis of the brand’s strategy. With the newly-generated strong international coverage, we are now traversing the luxury goods, fashion, financial and trades sectors like never before.

Rosemary by Vanessa Martinelli: A palette of colors in tribute to the flora

Vanessa Martinelli took her inspiration in the gardens of Lugano to design Rosemary… her latest collection set with leaves of tsavorites and amethysts.

Serpenti Viper is the next step in the transformation of the emblematic snake, revisiting the symbol in a bold new way. And to embrace this evolution, Bvlgari has brought together the finest of the 7th art and the digital age…

Spotlight on Sophie d’Agon, the label that makes color its jewelry credo

By choosing colored stones, Sophie d’Agon has made a name for herself with a line of jewelry that women can enjoy wearing every day. Creative pieces, offered at a fair price, “so that women can afford them without waiting for…