Sharing Jewelry : Links forging new links thanks to the initiative of a woman. A humanist story around jewelry. Made of gemstones and magic threads, the jewels are crafted with heart and soul and carry a story

Katia Samson spent nearly two decades working in the media industry working on accounts such as Coca-Cola. After a burn-out, she decided to step back and take a break.

While attending a EuropeanYoga Festival, she came across a small necklace bought to support the Tibetan shop at the festival bazar (first photo attached), taking a flyer along.

Back home, she was amazed by the delicate work and regretted not having purchased another one. Katia noticed the folded flyer with contact details and a few lines describing how the workshop in Darhamsala was created to support three Tibetan women, ex-political prisoners and the their English friend, a single mother, who was living there.

Moved by the jewel and the story, she decided why not follow the thread ? She wrote and called the contact number. On trust the British woman at the other end accepted to send a few pieces to France. She explained how they were all taught this Japanese technique of micro-macrame threading craft.

The nuns were part of the group of “The 14 Singing Nuns from the Drapchi prison.”

Ngawang, Yangzom and Sangmo were arrested in their monastary in Lhassa, ( Tibet) for taking part in a peaceful demonstration against Chinese occupation. Tortured and sentenced without a trial, they have served long prison terms. AIn the three years of exile in India following their release, they’ve learnt to craft these delicate yet unique jewelry pieces made of gemstones and beads (rubies, crysoprases, labradorites, amethystes…) set on threads.

Since 2009, the nuns have saught political refuge in Belgium. Since 2014 they became Belgium nationals. Their aim is to return to Tibet and to visit their family (not seen for over 15 years for one of them). They have still been declined for the last 2 years a visa to Tibet !

Today, they continue to create some of Sharing jewelry, at their own time and pace…

When it all started

In 2008, the nuns collaborated in the Darhamsala workshop making some fine pieces that Katia sold during a Christmas private sale she organized in Paris that same year. Soon after that, they moved to Belgium and the jewelry activity stopped.

A few months later, during a trip to Brussels to attend a meditation practice, Katia went to meet the nuns and check how they were doing. They spoke no French, little English and were quite shy at first. Looking for a mean to bring them support and some additional revenue, she asked if they would like to continue making some necklaces provided she could find all the necessary material from India. They were happy to go on. It took Katia some time and learning about stones, threads to figure out what to buy, where to buy and how to buy. For the first 4 years this project was just aimed at helping out the nuns.

The constant positive feedback around the whole project and the jewelry led Katia to focus on the jewelry and into the creation of the the brand Sharing. Since then, Sharing has grown allowing new collaborations, new creations and new encounters. A small cooperative of Tibetan women in Dharamsala and a family of craftmen from Cashmire contribute to the Sharing adventure.

The role of Katia is to create and co-create the different styles, give directions on colors, threads and stone combination. At the same time its important to allow the gifted craftmen to express their own creativity. “It is a WE story.”

The spirit, the ethics, the delicate and poetic jewels need to speak out for themselves and they do. The jewels are simple and subtle but bring little sparkles to those who wear them.

Katia Samson has her own vision and direction, disregarding the high demand of the fashion trade for realeasing new things. The point is to build on a continuity and established relationship so that clients can always find their favorite styles of Sharing jewelry, never exactly the same, but not so different (“same same but different” is a famous Indian saying) . She agrees that sometimes it’s nerve-racking because the communication may be difficult as the Eastern frame of mind is so different from a Westerner’s way of thinking and working . « Learning patience and becoming more flexible has been a requirement and a great life teaching amongs all other gifts Sharing and being India brought along ». According to Samson, the whole venture has been a blessing and she feels most grateful to the nuns as she feels it helped her so much on her own personal journey.

Besides the three Tibetan nuns, Katia was able to contact the young man that taught the nuns and started through Skype a working collaboration based on trust. They only met three years later when Samson traveled to Jaipur to acquire stones to bring back to Europe. Then again two years ago, she met a young man in need of work. His willingness convinced her to give him a chance. Ever since, he’s become her third source of production. He is now able to provide work for his close relatives and bring much support to his family.

7 years later, thanks to Katia Samson over 600 Tibetan necklaces, and other styles too, are being made every year and sold to an ecclectic range of shops. Over 50 around the world carry Sharing Jewelry excluding China for obvious reasons.

Sharing, Sharing that’s all hope for ! 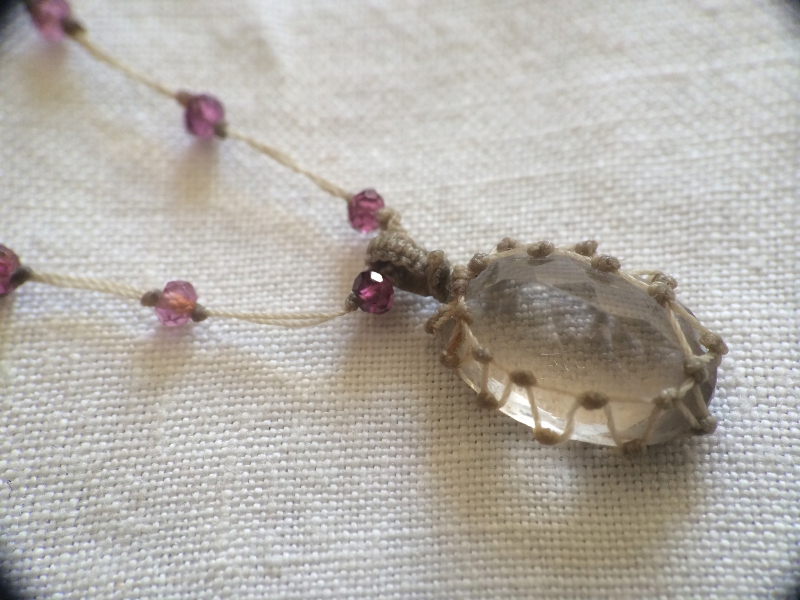 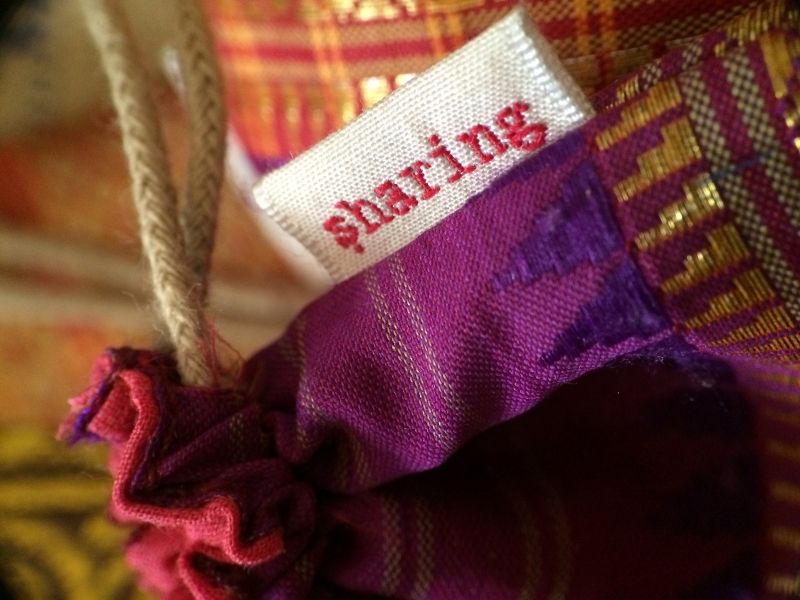 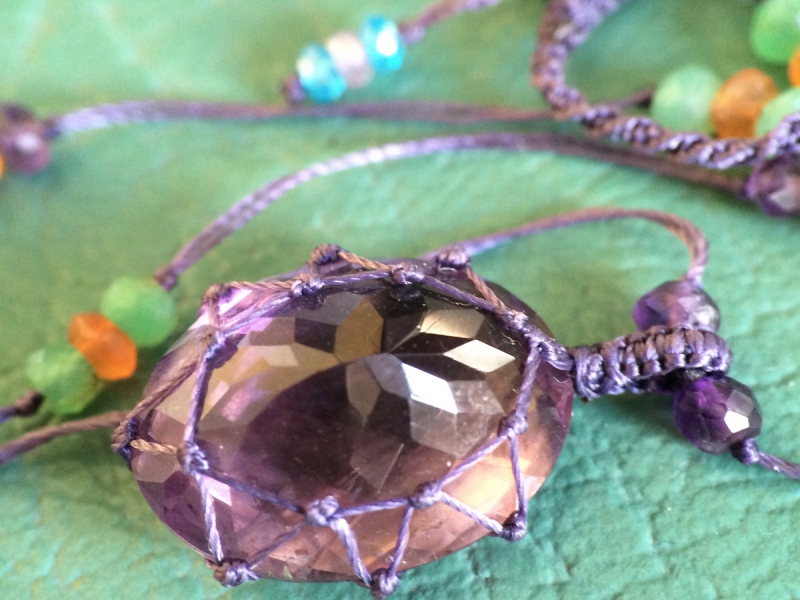 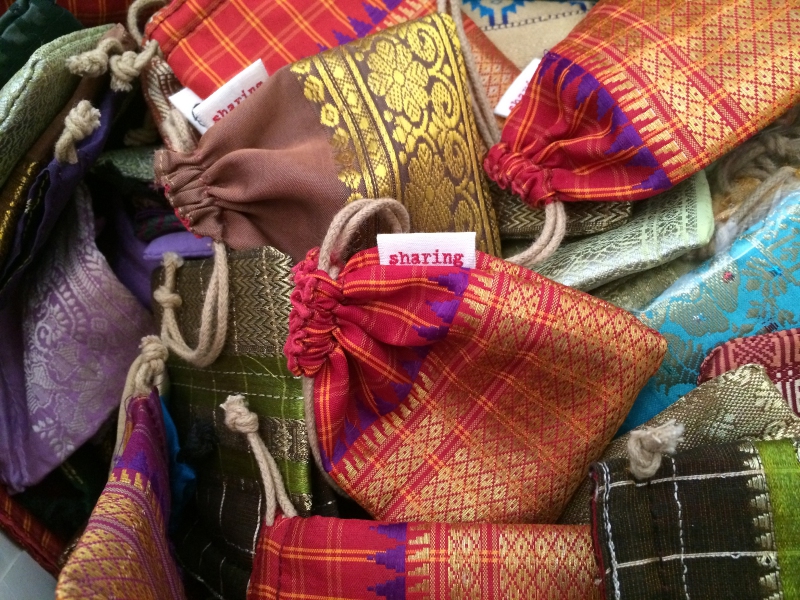 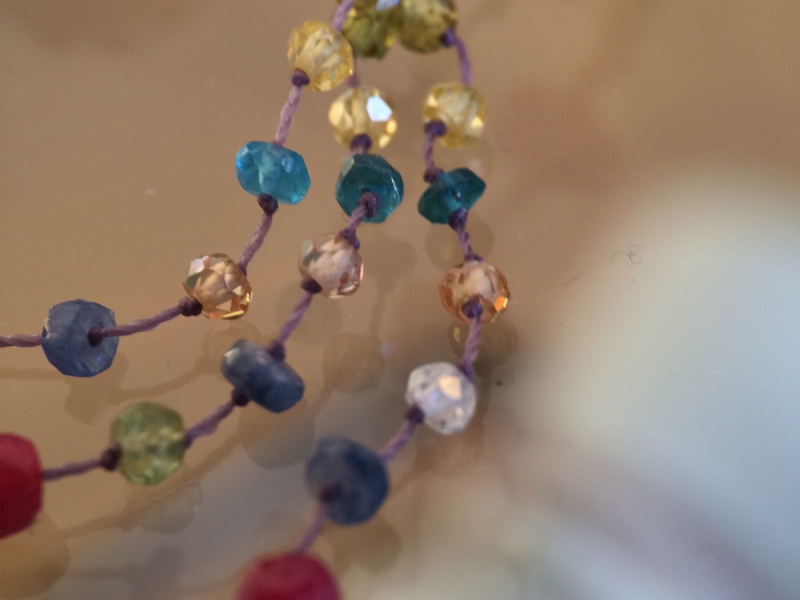 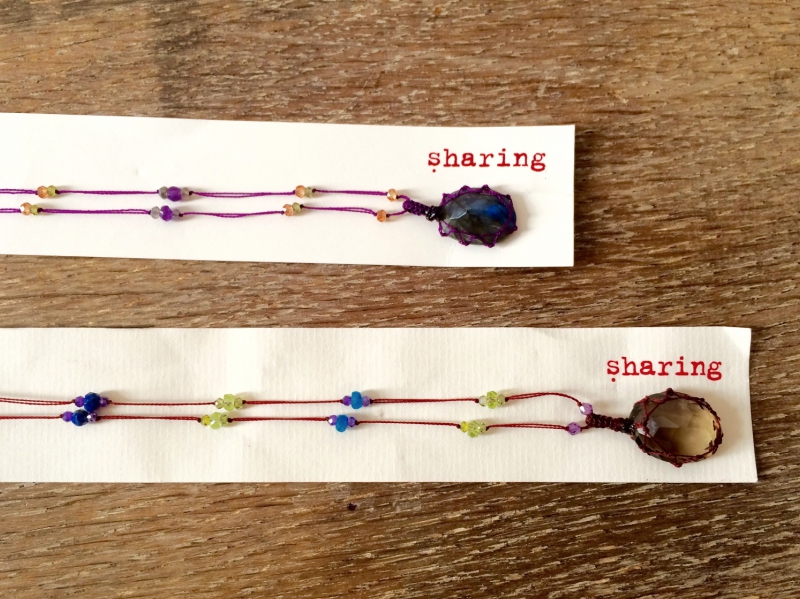