Gabrielle Chanel -aka Coco-  founded her eponymous brand in 1909. Throughout her career Gabrielle inspired many women, creating designs breaking the codes in many ways until the day she died. Her legacy and spirit keep on living today thanks to the admirable work of the entire House of Chanel.

One of her first popular lines was that which was made of jersey fabric. This material wasn’t commonly used in fashion at the time, but rather in men’s undergarments! Gabrielle Chanel saw how flexible and comfortable jersey was, and also the fact that it draped well on the female body. She was able to create a single garment design, a dress made out of one piece of fabric. This concept translated into her famous Little Black Dress (LBD). She chose a color, black, that was most often associated with mourning and turned it into the perfect base piece of clothing every woman should wear. Using silk, she created an easy, comfortable article of clothing that could be an everyday dress or dressed up to be evening wear. 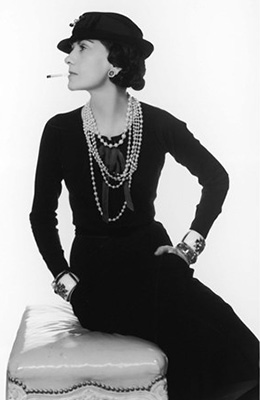 Having established a reputation as a fine fashion house, Coco continued to expand her business with new locations in France. With this expansion came new items for her store: accessories and perfume. In 1921, Coco commissioned Ernest Beaux, a perfumer, to create a perfume for the brand. She wanted it to be a womanly scent, nothing resembling the common smells of the time of either a single floral or jasmine. The result was the iconic Chanel N°5 perfume. This scent transcended society bounds as well as maintained its popularity, even to this day.

Chanel continued to expand and continued to go break the codes specially when she launched her first and only jewelry line in 1933. This was launched during the Bijoux de Diamants exhibition. It was shortly after the 1929 financial crash when stock markets dropped causing bankruptcies and financial struggles. In other terms, families suffered the collateral damages of the crisis for years and  were spending money on nothing but food and first needs. Yet, Gabrielle Chanel chose that period to create a fine jewelry collection using platinum and diamonds only at a time where women preferred costume jewelry only because that’s all they could afford. Paradoxically, it was a raging success. The French and International press could not stop talking about the collection reaching all the way across the Atlantic where A-list of clients wanted the pieces. (Think about the fact that in 1933, four days were needed by boat to reach New York from London.) The theme of the collection was inspired by the sky including comets, stars and suns made of diamonds and set as centerpieces. It goes without saying that those designs marked the premises of the Chanel Jewelry DNA.

During WWII, Chanel had to close her shops, leaving only one out of her five shops open. There, she sold perfumes and accessories, which were both still in demand. Nine years later, Coco Chanel reopened her couture house. It was in 1954 and it came with a new wind of ideas. She partnered with jeweler Robert Goossens who shared her love of mixing high-end with lower-end jewels.

Coco also decided to reinvent her favorite handbag : the 2.55. This bag was named after its date of creation, February 1955. Made of strong, durable leather and a gold chain strap, this handbag was made to last. It has been said that Coco loved putting her hands in her pockets and wanted to keep women’s hands free. This led to the shoulder strap concept for purses.  The 2.55 bag came with two sturdy chain straps. Its closing buckle became so iconic that the House of Chanel paid tribute to the 2.55 reference in 2017 when launching Code Coco, a watch bracelet with a closing clasp in the shape and mechanism of the one used for the purse.

Her last main innovation was the quilted diamond pattern spotted on the fabric.

One rumor claims that the zipper compartment in the front lap of the 2.55 Bag was were Coco Chanel stored all her love letters! And she received quite an amount…

After this resurgence, Coco continued to be actively part of the brand. Up until the day of her death, and apparently even on the day she passed, Coco was working on her new catalogue.

On January 10th of 1971,  Coco Chanel died, but her legacy outlived her and will continue to do so for the years to come.