The Prohibition era in America was a time of excess and debauchery in the dark corners of illegal bars. The nights were rife with cocktails and the jewellery that went with them. Let’s look back on the illegal rise of a term that became as universal as it is dazzling. The original article of story of the Cocktail Ring was published in the May 2017 Edition of La Série Limitée des Echos.

When the U.S. announced the 18th amendment on January 29th 1919 banning the production and sale of alcohol, America learnt that stopping people doing something only makes them want to do it more. As a matter of fact, the year 1920 marked the dawn of the Prohibition, a decade built on excess starting with the rise of speakeasies which were illegal bars whose owners asked customers to whisper when they wanted alcohol (“Speak Easy”). Then came the emancipation of women and the arrival of the Flapper who resembled a tomboy woman with style. The Flapper would wear make-up, short skirts and have a fringe, listen to jazz, smoke and drink alcohol. A real modern woman if we think about it!

During the Prohibition, contraband alcohol was often good value but undrinkable. The only solution was to mix it with other substances to make it drinkable. The term cocktail became a universal word. Every woman dreamt of being part of the underground cocktail culture. For those in the know, there were two rules to follow. The first was to have a glass of alcohol in your hands at all times. The second was to ensure that everyone could see that the illegal beverage was held by nimble fingers. Women, often more mischievous than their male counterparts, rushed to show off their fingers with eye-catching and extravagant rings. In a show of rebellion, the Flapper would proudly wear rings with XXL gems, tiaras and stackable bracelets on both wrists. It was a sign of independence: the bigger, the better. The cocktail ring became the ultimate woman’s accessory epitomising excess and opulence. 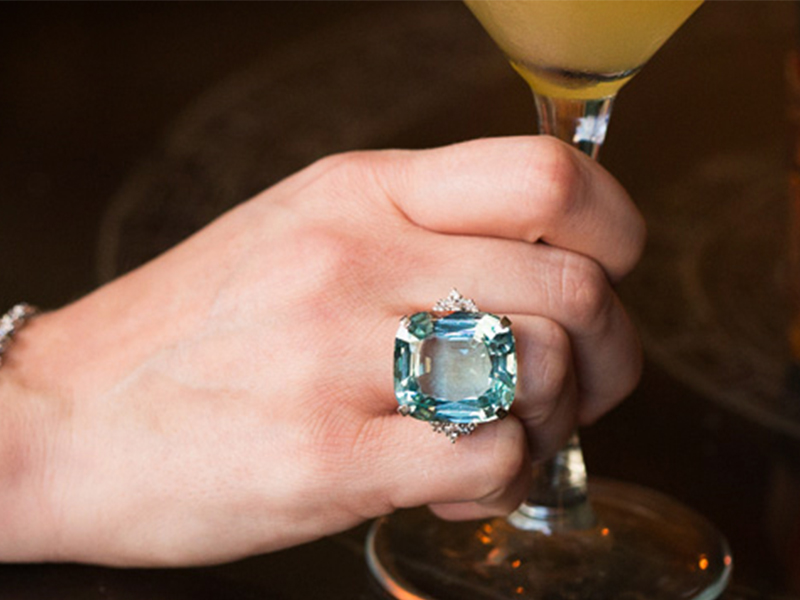 The years go by but jewelry lives on. The post-war Art Deco style held firm. Until 1960, the cocktail ring was still an essential item which women wore to any event whatsoever. The rings were usually platinum-mounted and paved with large colourful cabochons such as aquamarine, citrine or turquoise of at least 3 carats elevated by diamonds or gemstones. From the American iconic jeweler David Yurman or Fred and his sugar loaf rings excelled on the market. However, the trend lost its shine for 20 years before coming back into fashion in the 80s with even bigger, more colourful and showier rings. Every jeweller from Bvlgari to Buccellati brought out “cocktail” collections pairing precious stones with semi-precious gems in keeping with the brand’s values. Piaget explored every aspect of the cocktail ring in a collection called Limelight Inspiration Cocktail mounting for example a 24.57 carat tourmaline and a 3 carat citrine slice of lemon on the Mojito model.

Cocktail rings are now back in the limelight with a trend for animals, flowers and nature. Depending on the central stone, there’s a ring for every budget, every style and every finger apart from the left ring finger kept for the wedding band and engagement ring. But that’s a rule to be broken. If you asked Coco Chanel, the undisputed icon of doing her own thing, she would say that the French flapper that she is just does whatever she wants.

The girl to follow: Hermine Sacau, founder of Douze Paris

Between her commissioned creations in recycled gold and her jewelry transformation services, Hermine Sacau generously displays her vision of “Slow Jewelry”.