Cyril Bismuth is a stone lover since his youngest age, he has been represented at Montaigne Market from the beginning and spotted by Cara Delevingne amongst others. Undoubtfully, Cyril Bismuth, a cool kid from Paris has become an icon in the jewelry industry as part of the new designers’ crew to look after.

Passionate designer, loving husband, traveling bird, inspiring creator, jewelry addict: portrait of man his in late 30’s. An established father of two who lives in the center of Paris when he’s not picking stones in Asia or partying in the States. A talk with Cyril Bismuth founder of Aaron Jah Stone.

Early passion
I have always been collecting stones … from pyrite to flint! Every since I was a kid, I have been a stone lover and everytime I came upon something shiny… I felt like Indiana Jones who had just found the Holy Grail.

Family
Every Shabbat was spent at my grandmother’s where there was always a mishmash of jewelry pieces… and I always wore tons of bracelets on my wrists. I come from a dentist family where they all work on teeth… I decided to break the pattern and work on stones…Way cooler.

Travel
My dream was to go to the U.S. which I did … in doing something far different from jewelry. Then, I realized that my work needed to include some traveling. When my wife moved to Singapore for a student program exchange, I followed her.

Process
I have always bought stones, I have always loved materials and I have always been looking for different types of skins. I have eclectic tastes…When I visited Bangkok I bought some stones I made some bracelets from that I later sold to expats. They started loving what I was doing…

Trigger
A good friend of mine India Weber – who is a model and a blogger (shown in the below images wearing the Phoenix collection-) pushed me into the selling process which I wasn’t very keen about… What I was doing, I was doing it out of passion and nothing else.

Style
My bracelets and necklaces started to seduce people… It seemed that there was a clientele out there that could become mine. I was and still am mixing different styles… for example setting rubies with Mammoth teeth’s. The idea is that I don’t want to give the possibility to date the piece of jewelry. It can look as if it was made 300 years ago when in fact it was made yesterday… we are still in the idea where Indiana Jones just discovered a treasure!

Concept
Each piece is unique since each stone is different… and even if the basic idea of each piece is the same… they all are different!

Meaning
Aaron Jah Stone is personal and spiritual.
Aaron is my Hebrew name and additionally my second first name. Also, Aaron was Mose’s brother; he was an important priest who was depicted with stones… 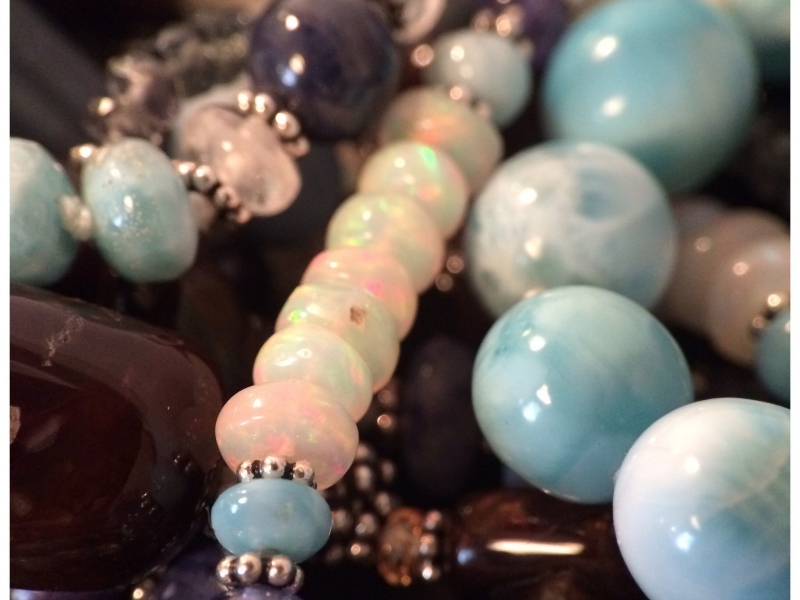 Stone was a way of wrapping up the full name of the brand which means nothing and everything at the same time as stones often recall jewelry. On my end… it enables creativity with no boundaries.

Stones
Love at first sight, or not. I choose them and pick the stones myself. That’s when I get to do most of my travels… Bangkok, Hong Kong, Burma…

Any favorites
Sujilites are purple matte, extremely deep and actually rarely used in jewelry although – sujilite stones are known to be a love stone, help into the healing process and makes your life better. Supposedly…

Opals on the other hand are very subtle. They can be black or white from Australia or Pink from Peru. Black opals are technically blue with various intensity and shades…I use them a lot in the Phoenix collection.

Dear, Phoenix and Stones
If we think about the Aaron Jah Stone collections…We could picture a Dear Deer with a turquoise central stone, the Phoenix studs set with a black opal and paved with diamonds and a multi-colored stones long necklace. You would cover it all!

Success story
My friend Sebastien Jondeau happens to be Karl Lagerfeld’s right man. When the big boss discovered one of my necklaces that Sebastian was wearing, my buddy gave it to him. Then, a few months later, in Singapore at the Chanel Cruise show, Cara Delevingne spotted the necklace on Lagerfeld, and requested one for her. She posted an image wearing her newly acquired necklace on her Instagram account and it did not take long to Pharrell Williams to place an order for unique pieces. My phone has not stopped ringing ever since. It was October 16th of 2014.

Work in progress
There are some periods where I work non-stop and never getting out of the workshop… you can tell from my fingers… often black and lacerated!

Retailing
Liliane Jossua, Founder of Montaigne Market was my first stockist… she believed in my pieces right from the beginning and that was back in 2009 or 2010. Time flies ! She still is my number one retailer and I do custom series for her… but I have been extending the distribution market to over 15 addresses worldwide.

Positioning
My pieces range from 350 Euros up to 15’000 or more for high jewelry pieces.

Celebrities love his pieces, customers do too and let’s not mention the press … Wait and see on what the cool kid from Paris with the tiny pony-tail never leaving his leather jacket, sneakers, ring and long necklaces will come up with in the near future!