Before the Russian Revolution of 1917 Fabergé was all about clocks, automates and avant-gardisme; post 2015 it is all about wristwatches, jewelry and modern objects. We have entered a new era within the world of Fabergé, newly owned by Gemfields the world leader in production of ethically-sourced colored gemstones. Not only they have access to the best stones, but their movement are developed by Agenhor, an independant Swiss manufacture specialised in the conception of mechanical modules for watch complications.

The story behind the story

The history of Fabergé is as tragic and fascinating as the life of the last Romanov Tsar, Nicholas II and his family who perished in the wake of the Russian revolution. Back in 1917, this dramatic event changed the course not only of the great country, but the entire world. When Peter Carl Fabergé came to be known as the jeweler and goldsmith of the great Russian imperial court, no one could have imagined that he would leave a tremendous imprint on contemporary haute-joaillerie with his legendary series of lavish and ingeniously-designed imperial Easter eggs.

What started out as a gesture of sincere love and devotion of one of the world’s greatest men towards his beloved wife soon turned into a fairy-tale of regal exuberance, feverish imagination, talent and panache for artistic aesthetics and spirit. His exquisite and artistic use of colour, precious stones and materials has long captivated European royalty, nobility, tycoons, industrial and artistic intelligentsia of Paris, Moscow, St. Petersburg and London. Despite the untimely end of the Fabergé business brought upon by the Russian Revolution as well as to the Romanov dynasty, the House of Fabergé managed to reunificate the Fabergé brand with the Fabergé family in 2007. In a dramatic and movie-like way the history of the legendary jewelry family has always been entwined with the dramatic events of war-torn Europe and saw the brand rise from the ashes of their once regal fairy-tale into the global trademark of superb craftsmanship it is today. People have always been fascinated by stories of love, devotion, turbulent romances and epic challenges and these are all elements behind the revitalisation of the Fabergé name and philosophy. Because in the face of adversity some truly exceptional works of art endure…

Find out about the intimate bond between watches and jewelry.

The brand’s rich heritage and painstaking penchant for beauty and harmony manifesting itself in three superb collections – Alexei, Agathon and Anastasia –fusing artistry and craftsmanship with ingenuity and modernity. Wearing a piece by Fabergé is similar to adornig yourself with a treasured keepsake from a time long gone – one of great love stories, turbulent historic events and the inspirational power of metamorphosis.

Just to get the facts straight, Fabergé is often if not always associated to their eggs, an art they master in combining quality and magnificent colors. Yet, the brand has given the world so much more than just splendid Imperial eggs we’ve come to know and marvel…Peter Carl Fabergé was a true visionary, a monumental man of characteristic perfectionism and panache for beauty in all its forms. His exquisite gold-smithing skills and artisan traditions found ingenious ways of showing in clocks and watches that were incorporated into his rich repertoire of jewelled objects and personal accessories. Fabergé himself did make a few wristwatches but it was not his hobbyhorse, clocks and desk clocks were his thing! However, he created a variety of objects where each and every creation was linked to a mechanical component. It was his duty to associate creativity and mechanics. His automates were the best examples proving he could mix the technique to the mechanics.

Back in the day Peter Carl produced a number of automates, disguised as enchanting little surprises within his impeccable Imperial Easter Eggs. The first record is of a Fabergé elephant that was the Diamond Trellis Egg made in 1892. In 1929, this painstakingly-crafted mechanical elephant was presented in a wooden box as a Christmas gift to King George V by his royal family –a present truly worthy for a ruler. It was at this time that the Fabergé brand began to establish itself as a powerful and changing force on the European jewelry scene. The Peacok Egg was an object where the walking animal was inside the egg made of rock crystal… You can see the object at the Sandoz Fondation in Basel. Another famous automate was the Snake Egg. It represented a unique object where the head of the reptile gave the time. Everything was about surprise. We could not figure in advance how the time was given, nor what the movement was going to be.

If Faberge before 1917 was all about clocks, automate and avant-gardisme; faberge post 2015 is all about wristwatches, jewelry and modern objects.

Nowadays, the House of Fabergé takes inspiration from its storied past and has revisited the dramatic story of its founding family to create eternally original pieces like the Lady Compliquée Peacock – a remarkable creation in terms of mechanical creativity and complexity that earned The Swiss Watchmaking Industry’s Highest Honour. The magnificent watch is reminiscent of the 1908 rock crystal egg created for the Dowager Empress, which when opened revealed a delicate enamelled peacock nesting in a golden branch. Fabergé’s automaton peacock survives today and is reminiscent of the tales of fabulous ancient and medieval clockwork creatures, from pneumatic songbirds to golden knights guarding the priceless treasures of Peter Carl Fabergé.

Bringing Fabergé up to date into the modern world of watch-making has been a real challenge, yet, a successful one! The have kept the commune key attributes in design paying close attention to proportions, layering of materials including colors. For example, the case of the Lady Fabergé has been built with a surrounding ring that can be changed, customised or adapted upon a variety of styles.

The Lady Compliquée Peacock was awarded last November by the GPHG (Grand Prix de l’Horlogerie) for the Most Complicated Feminine Timepiece; a movement developed by Jean-Marc Wiederrecht, the genious brain behind Agenhor and under the leadership of Aurélie Picaud,  Timepieces Director of the brand. 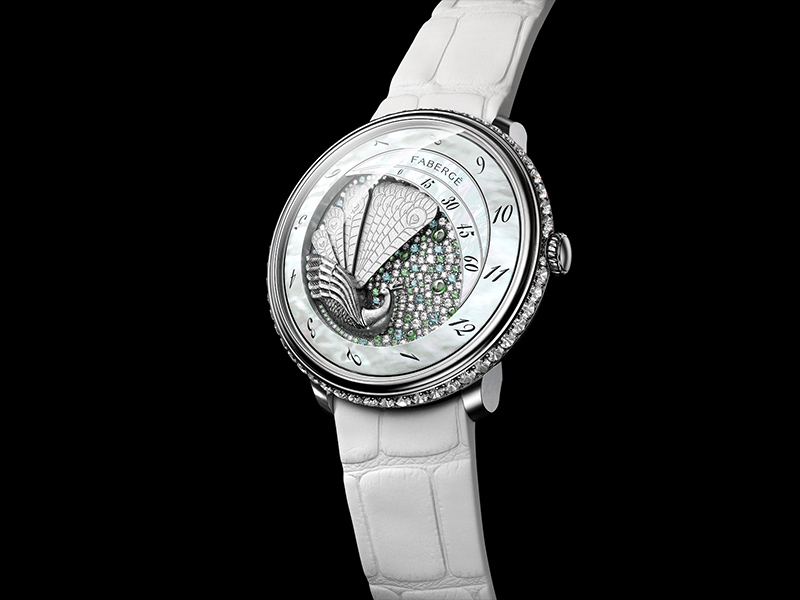 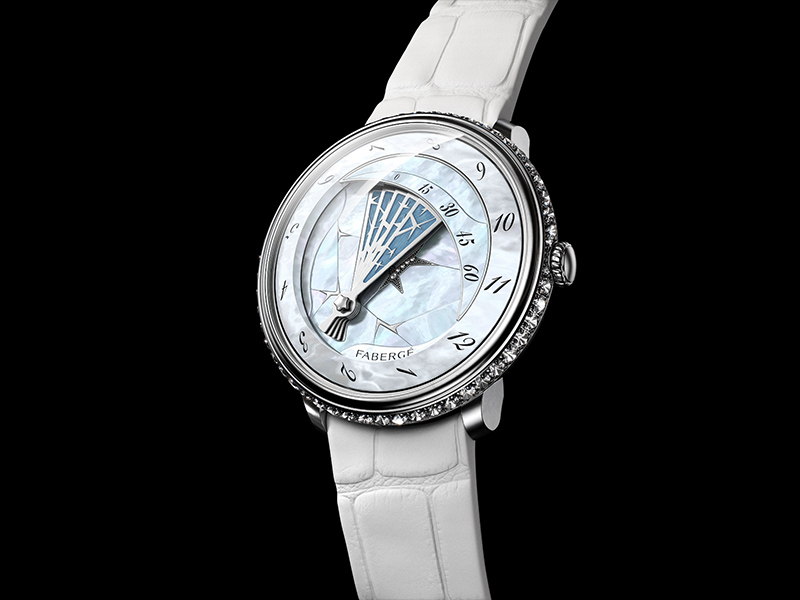 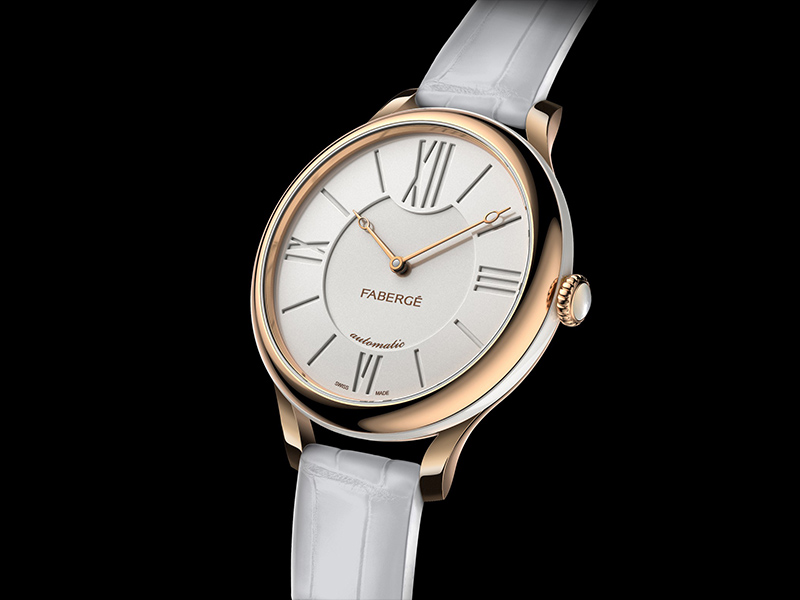 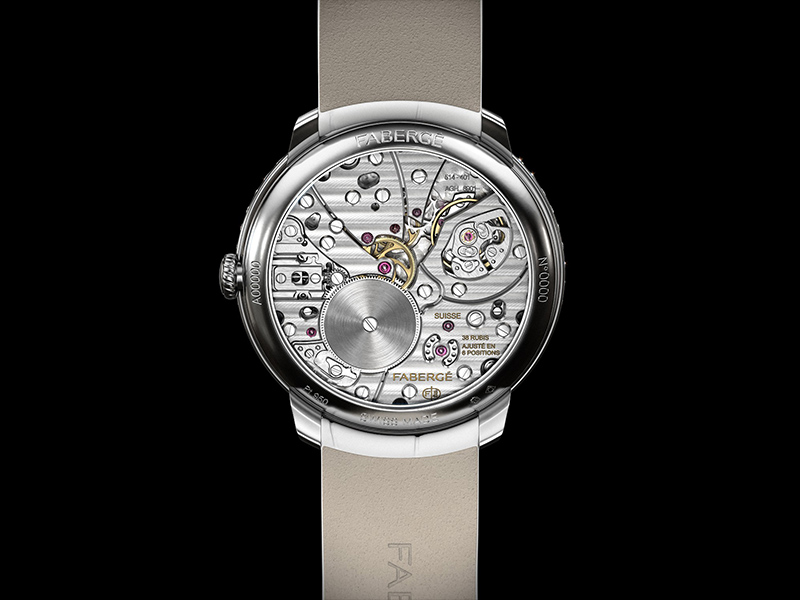 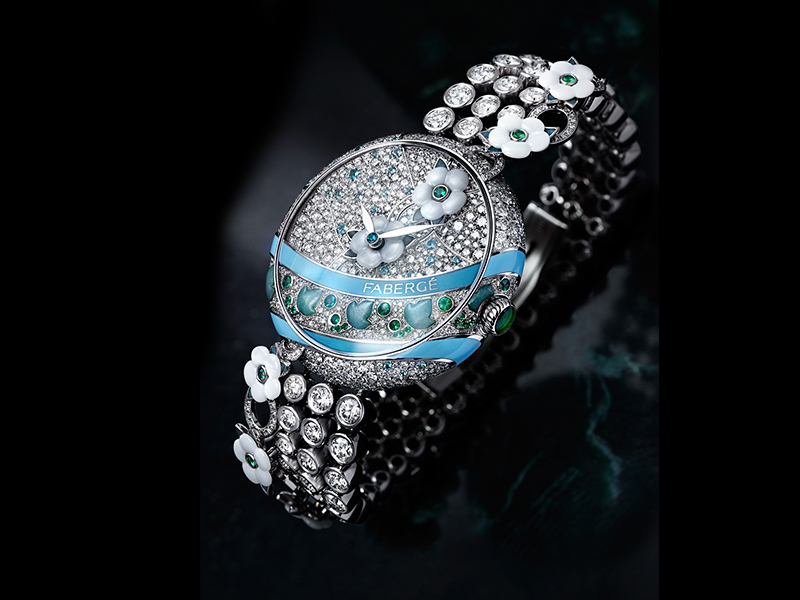 When Fabergé meticulous workmanship and penchant for multi-colored compositions of divine symmetry met Jean-Marc Wiederrecht and Agenhor – it was only natural that the world would fall silent before the combined creative genius of these monumental artists. Incredible décor and poetic design are just two of the great examples of watch-making that are a fantastic example of horology. For a brand so rooted in its rich historic traditions like Fabergé – to be able to create complication so innovative and so delightfully modern is nothing short of a true testament to the brand’s excellence in creativity, design and craftsmanship.

Reminiscent of the brand’s famous Imperial eggs that marked the beginning of the Fabergé legacy – its timepieces were conceived as a natural continuation of a never-ending desire to create jewelry relevant to its era. The concept of the watches inspires and delights – much like the original eggs created by Peter Carl Faberge’ who believed in delivering both fascination and emotion through his painstaking goldsmith and artisan techniques.

A story of re-invention

The fascinating world of Fabergé tells a tale of artistry, craftsmanship and ingenuity fused together in an endless display of mechanical creativity. As the world’s most iconic artist jewelry brand – its extraordinary creations, timepieces and objets d’art convey breath-taking individuality in a never-ending pursuit of something beautiful, creative, and in most cases totally unique.

Tracing its previous incarnations of artistic mastery, Fabergé continues to open new chapters in its intriguing story to set the stage for a total revitalisation of the brands name and philosophy through creations which are designed to become future heirlooms. Up until 2015, all of the developments followed the watchmaking licences the brand had. When it stopped a year ago, that’s when Fabergé took up the development internally. Did you know that H.Moser used to provide the Fabergé watches their mechanisms and movement ? There may be something in the pipeline for the upcoming years…

A few days away from the beginning of Baselworld – the annual rendez-vous of all of the major actors of the industry… what will Fabergé surprise us with? How will they manage, once again, to translate the unexpected ? Keeping in mind their sense of detail, we’ve heard that there was going to be some extraording gem-carving, stone setting, watch and movement complication … Be patient, and stay tuned!