The flamboyant redhead actress is celebrating her first anniversary as ambassador of Piaget wearing the latest timepieces of the brand that will be launched in January. During the SIHH 2016, on a feminine standpoint Piaget will unveil the new Limelight Stella and the Limelight Gala Milanese relaying glamour from the 1960s.

Created entirely in-house at Piaget, the Limelight range of timepieces honor the traditional house style. In keeping with the glamour of these new watches, the sublime designs portray beauty, femininity and grace through their voluptuous silhouette and classical elegance.

The round case of the Limelight Gala Milanese is enhanced by two dainty elongated asymmetrical lugs. Its voluptuous curves are highlighted by a bezel set with subtle round diamonds, as well as a pure dial gracefully punctuated by slender Roman numerals. The gold bracelet in Milanese mesh complements the feminine and refined design, turning the Limelight Gala into the epitome of absolute femininity according to Piaget: inherently elegant and supremely sensual.

A stunning Piaget creation born in the 1970s where the Limelight collection bears eloquent testimony to the inimitable Piaget style based on a powerful design vocabulary that appealed to the rich socialites and celebrities of the time. Buoyed by the creativity of the Maison, the Limelight models symbolize immutable feminine elegance, while also asserting Piaget’s desire to create watches entirely dedicated to women’s powerful beauty. Everything is about architectural aesthetics, divine balance, symmetrical proportions, and subtle details.

Revisited for the first time in 2013 on a satin strap, it now appears in an exclusively gold-clad version featuring a Milanese mesh strap that enhances its generous curves. This inimitable identity based on crafting gold using a variety of sophisticated techniques has been consistently reaffirmed through the Limelight collections, displaying unique mastery and meticulous expertise. From timepiece to jewelry seamlessly integrated within the case and meticulously adjusted, the Milanese mesh bracelet makes a perfect match for the bezel and its diamond-set elongated asymmetrical lugs. The superbly supple and silky noble material flows and shimmers over the skin, while the intrinsic wearer comfort reflecting the superlative standards of the Maison is as exceptional as ever. At Piaget, the ideal of devoting close attention to every detail is a consistent reality, while exquisite finishes admirably showcase its distinctive skills and commitment to perfection. Embodying the promise of an art of living that exceeds every expectation, the singular and timeless Limelight Gala version 2016 sets the crowning touch to today’s urban woman for whom glamour is an integral part of daily living.

With her in mind, Piaget makes every moment an enchanted occasion for wonderment. 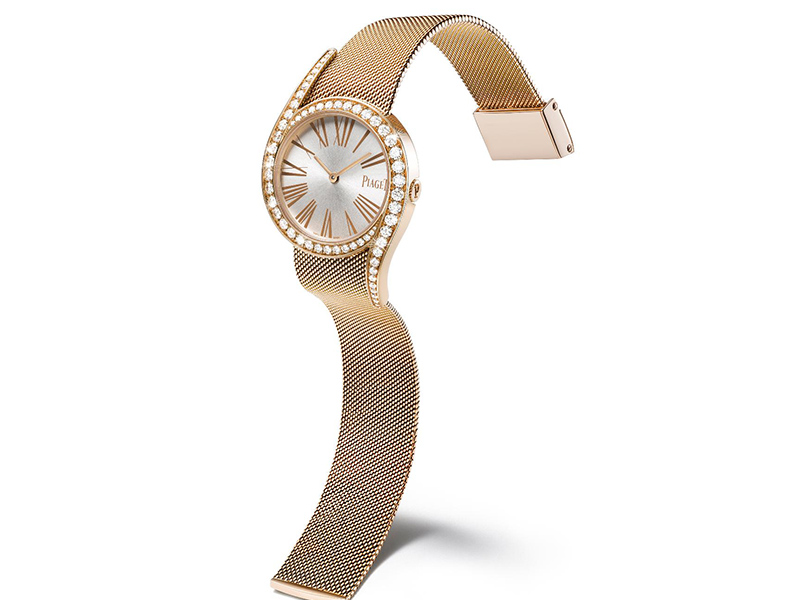 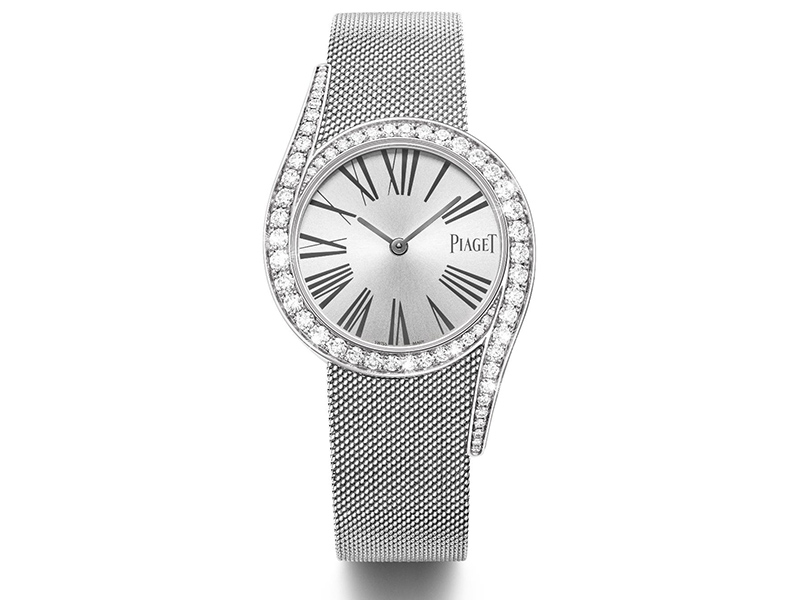 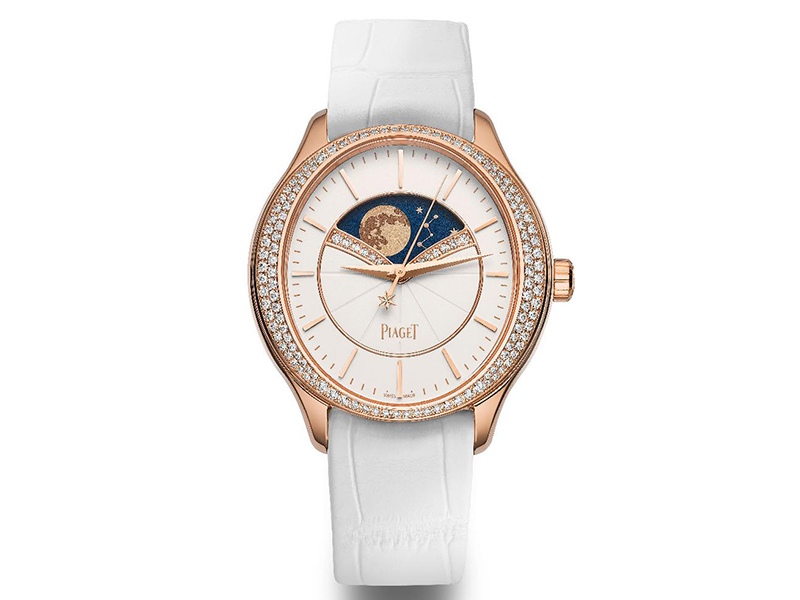 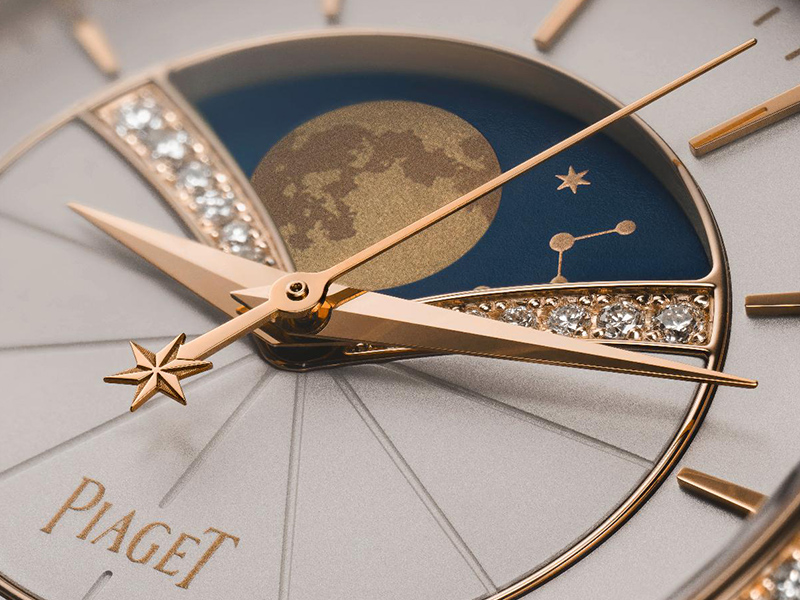 The Limelight Stella collection is a natural continuation to Piaget’s vision to blend art, design and jewelry into a single designed timepiece. The watch complication is writing a new chapter in Piaget’s enduring love story with women. Inspired by the Moon and its mystical connection with the female spirit, Piaget expresses a new approach to this theme focusing on its aesthetic and above all its lyrical nature. Dreams and imagination pervade time’s relentless march, infusing it with a unique touch of soulfulness.

As powerful as a talisman, Limelight Stella is endowed with a singular ability to release the woman wearing it from the linearity of time with the captivating complication represented by the moon phases. The Limelight Stella equipped with an astronomical moon function reproduce the lunar cycle with an exceptional degree of precision. The moon phases appear on a disc adorned with stars and two moons.

Seductive contours and radiant diamonds are brought together in tribute to a woman in love with freedom, as the Limelight Stella provides an entirely different measure of time. A subtly complex mechanism enables it to display the lunar cycle in an intricately designed game of hide-and-seek played by the Sun and Moon in a large aperture at 12 o’clock.

The new mechanical automatic movement designed, developed and produced in-house by Piaget is truly set to become the standard against which all female complications watches are to be measures from now on. The watch has a 42-hour power reserve, indication of the hours, minutes, central seconds and moon phases at 12 o’clock. Lending an ultimate touch of refinement to this complication model brilliantly cultivating the subtle transition from sun to moon, a star is perched on its large seconds hand.

Setting a perfect stage for the eternal charm of femininity, everything about the Limelight Stella contributes to enhancing its elegance and glamour, both signature attributes of the Piaget style. In a clever play on shape-in-shape effects, the Limelight Stella available in red gold or white gold and set with diamonds on the bezel or not… has a 36mm diameter. The dial reveals a subtle balance featuring an ‘oval inside a circle’ theme that extends through to the heart of the dial. For this creation, Piaget has opted to focus on moon phases, which occupy a prime position on the dial, entering the scene in a fan-shaped aperture delicately hemmed by two lines set with 14 brilliant-cut diamonds.

Spherical and generous, unexpected and mysterious, sensual and intensely present, the Moon stands out against a deep blue star-studded backdrop depicting the sky chart of the Northern Hemisphere.