Yes, Leo did win his first Oscar yesterday night. A memory that will probably last in his mind more than the night he spent with me. True story, Leo and I were for real… Me, him and my UR-106 Lotus.

Yes, since yesterday Dicaprio reinforced his title of being a living legend awarded for the first time with an Oscar after 5 nominations. It’s all over the web, and it’s all over my head. ♯Oscars2016 ♯Winner ♯Leo ♯god

Famous for his leading roles as Jack, Romeo, Gatsby, Frank or more recently Hugh Glass, Leo stays Leo for his friends. Since he is the best friend of a good friend of a friend, consequently, Leo becomes my friend. ♯Stillfollowing ?  And yes, I can officially say that I have spent the night with an Oscar winner.

It all started on an island of the West Indies where Leo decided to follow me for the holidays for the second time in a row. Although last year he was shy, chubby and also in a relationship, this year he was outgoing, handsome and single. ♯Luckyme.

One of the biggest advantages of the beach is that a natural glow combined with wavy hair and a casual outfit work in all situtations. I have heard that a single accessory either finishes or dresses up a whole silhouette Therefore, I decided to take one thing : the black version of the Urwerk 106- Lotus. A jewelry timepiece set with black diamonds that could easily pass for a large cuff. ♯WhoNeedsTimeOnVacation ?

Light, confortable, seducing the eye of the curious and questioning the conoisseur, the UR-106 on a woman’s wrist is not very common… pretty much like what happened on December 30th. ♯suspens

It was just a casual dinner with friends and family, having some quality time in a local restaurant until we decided to go for one last drink. Arriving on a tender to the boat moored in the bay allowed us to hop on board ! A few minutes upon arrival, our host let us know that a good friend of his was coming over and it might get crazy. ♯justsayin’

Struggling with my motion sickness, I have a hard time figuring out which one of the three satellites indicate the hours and the minutes of my watch. I must have forgotten that the UR-106 Lotus reads the time backwards – from right to left and the blue thing on the bottom is the lapis lazuli moonphase. I give up and lift my head up just on time to admire (in slow-sick-motion) Leonardo Dicaprio (himself) walking up the stairs saying hi to everybody (including me).  ♯Help ♯NeedToBreathe

Not that I deliberatly want to step further than 2 meters away from Leo, I need some air. The swell is getting really bad and I can’t really stay still. I reach the front of the upper deck… not for a remake of Titanic, but just for my own sake. ♯Rose&Jack ♯JackIamflying ♯LeoIambreathing.

Apparently I’m not the only one. Kevin and Tobey seem to be on the same boat (so-to-speak). The three of us make conversation trying to forget about that swell b***h ruining our night/my opportunity to score. 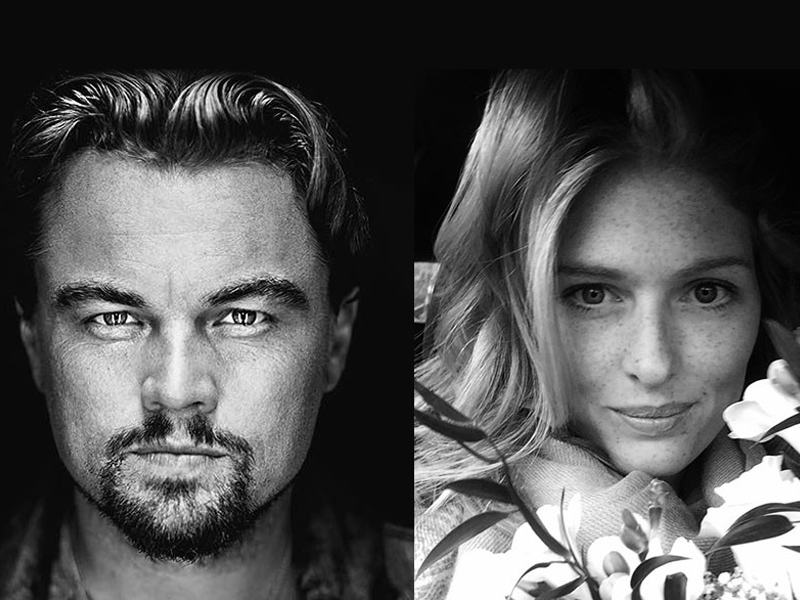 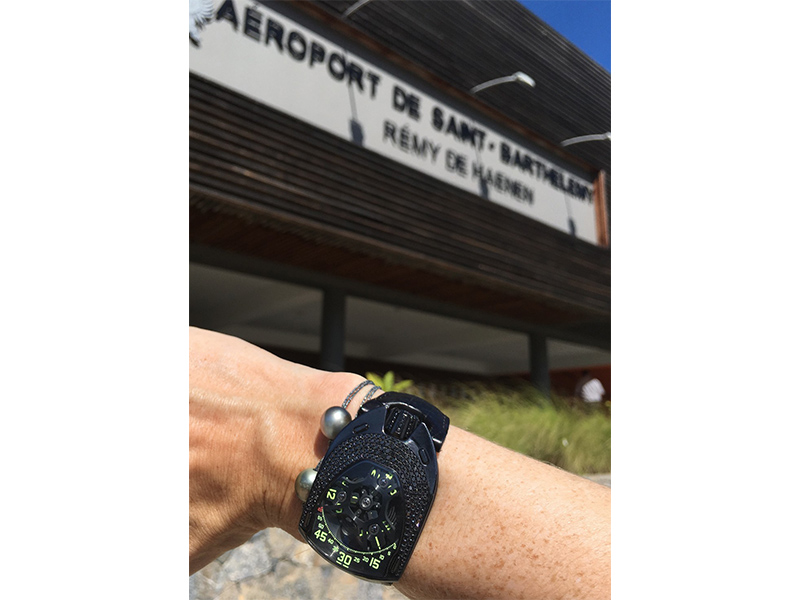 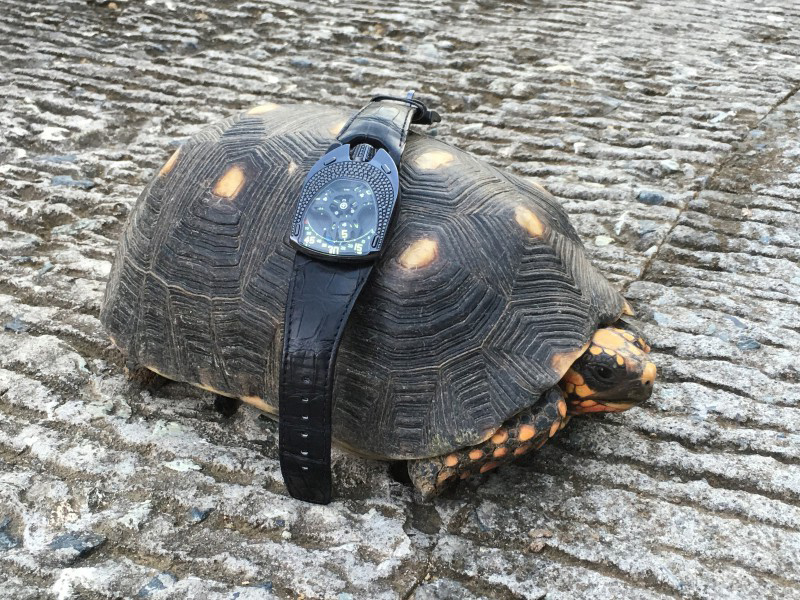 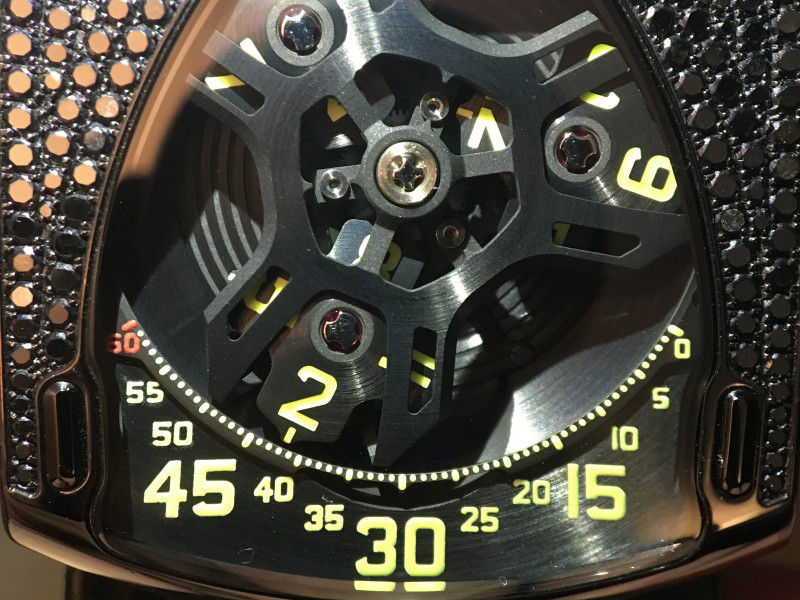 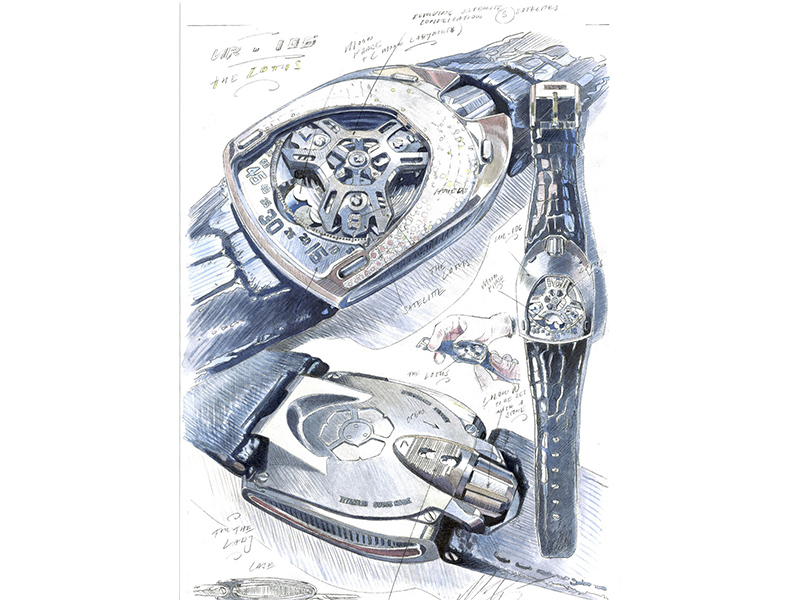 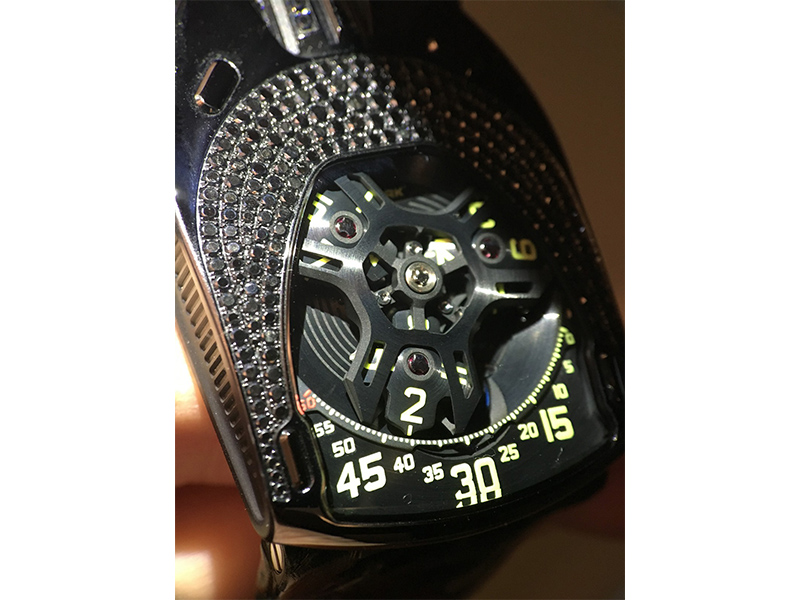 Everybody is dancing, chilling and smiling. I am envious. Despite my capacity to think and see straight, the faces of Tobey and Kevin ring a bell. I just have time to realize that I’ve been chilling with Spiderman and E from Entourage sitting next to Karlie Kloss and Prince when I spot Leo, alone, at the bar. ♯namedropping

Now is my time. Crawling up to him, I sit on the empty stool, he smiles : I melt. He asks me what I want to drink I reply water. ♯nocommentplease

Then comes the 15-seconds window when I realize that it is my only chance in the world to tell him something : marry me, I love you, I hate you, why aren’t you wearing a watch, what … I don’t really know and still don’t.

I see him briefly stare at my wrist. For a second I think about asking him if he ever heard about Urwerk, a complex yet classy Swiss brand who, for the first time in ten years launched a feminine timepiece. The UR-106 « Lotus » to be precise that comes in two limited editions of 11 pieces – made of titanium and black diamonds on black PVD treatment or white diamonds on steel. « I mean, Leo, really, can you believe that it took 18 years to perfect this concept, the satellites are their signature ! They even painted each numeral of the hours and minutes with Superluminova.» ♯makeherstop ♯please

Then I asked- for real, « What’s the flavor of your electronic cigarette ? » ♯REALLY. Yes, that is really what came to mind.

« Cappucino, want to try ? » he responded offering me his tool. Then came my second smart thought of the night : if I say yes, it means that my lips will touch the plastic part that touched his and maybe we’ll exchange a little bit of saliva in the meantime (almost the same if we kissed, right ?) but since I don’t smoke, I can choke and look ridiculous, so I won’t.

I politely replied « No, thank you » thinking about all of the girls who would have killed for less. He shredded, then stepped on my foot to go back to the dancefloor before I realized he was the only one who kept his shoes aboard. ♯bigfail ♯doublelooser

Chanel’s iconic watch is available in two new versions: both assertive, but diametrically opposed. While the Pink Blush is an ode to femininity, the J12 Electro is seductive with its radical, music-inspired approach. Who will win the battle?

Two watches, two styles. If the first one seduces with its refined and curved design, the second one intrigues with its irregular octagon-shaped case. We tell you all about the most exciting watchmaking match of the season.

Did you say “without Valentine?”