Aurel Bacs or the return of the star.
One year after leaving Christie’s, Aurel Bacs returned under the spotlights. When Edward Dolman, CEO of Philips Auctioneers and former CEO of Christie’s asked him to develop the watchmaking department at Phillips – he and his wife who were taking some time for themselves developing their own company : Bacs and Russo- weren’t sure what they were throwing themselves into. No more than a few months of negociation later, the auction house’s department was launched under the name of Phillips in association with Bacs and Russo.

7.10 p.m. All of the 200 chairs are full, about 50 people are standing at the back waiting for the show to start. Some would call it a fan club, others explain that it is his loyal team, nevertheless, a Hollywood celebrity walking up the stairs of the red carpet wouldn’t have done any better. Aurel Bacs enters the room under a round of applause. He’s back and ready. And so are we.

Aurel Bacs started by thanking the entire Phillips team and organization for the hand-in-hand development they have been doing for the past few months leading to that very day, sharing the same vision and working with the best team for the best pieces. Pucci Papaleo was the second in line. One of the most famous Rolex’s scholars, was thanked for his assistance in selecting 60 of the rarest examples of Day-Date carefully chosen that made the auction possible, including unique models and watches with royal provenance. Last but not least, Aurel Bacs thanked Jean-Paul Menicucci who hand-crafted 60 velvet watch boxes in a variety of colors for each and every Day-Date sold at the auction.

And then it started. The Lot #1, a stardust day-date from 1990 in yellow gold with a turquoise opal dial (technically called black opal) sold for CHF 65’000 in less than 35 seconds and four differents spoken languages, Bacs masters with perfection. Moving to Lot #6 the Bart Simpson Yellow lacquered Stella from 1997, ultra rare with black graphics and baton hour markers sold for CHF 90’000, “Thankfully I know you,” smiled Bacs back at the new owner of the watch.

On the Lilac Stella dial of Lot #8, Bacs stared at the bidder, paused, let his hand in the direction of the audience and waited… enough for the so-feminine Day-Date to reach CHF 60’000. Well done. 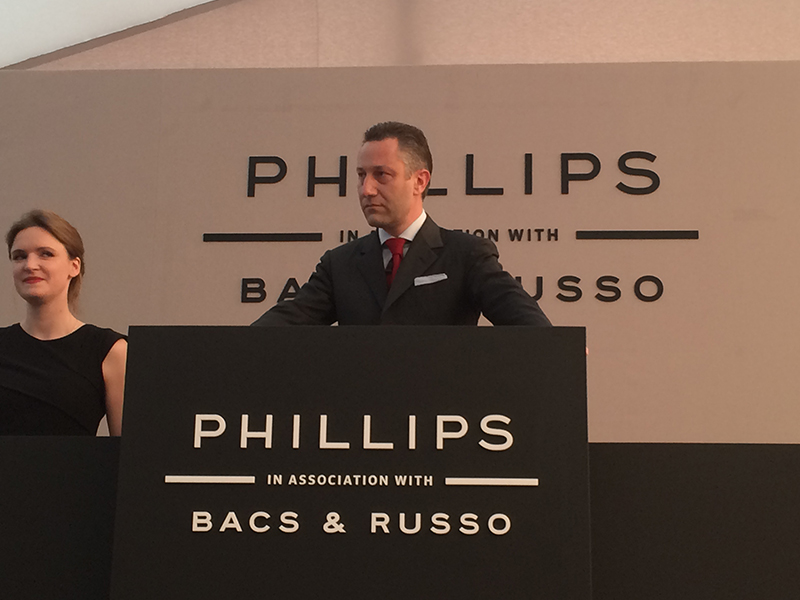 In a “less is more approach” – only 220 lots divided into two days of sale comprised the first watch auction of Phillips in Association with Bacs and Russo.

The auction took place in a majestuous tent on the parking lot of the hotel of La Reserve in Geneva, welcoming over 250 people waiting for the return of the world acclaimed auctioneer, the talented Mr. Aurel Bacs.

Saturday, May 9th of 2015. The Glamorous Day-Date Auction: 60 lots… which means 60 vintage and rare Rolex timepieces in extremely good conditions after in-depth research and good presentation of the pieces following one-to-one meeting with clients.

The Rolex Day-Date is one of the most influential watch design ever made and the most prestigious model of the brand since its creation in 1956 (although 2 pieces were dated from 1955 – probably pre-production pieces). The Rolex Day-Date is the first calendar to show the day of the week, self-changing and written in full at noon on the dial, in addition to the date indicators at 3.

The Day-Date became over time a commodity value, “a currency,” claims Bacs. It is a piece that is very well known on the planet and probably, according to Bacs, Rolex’s most clever invention… although at the time, they didn’t take the most of it as they did not realize the potential. Over the years, the Day-Date has seen a variety of options in terms of dial colors, bracelet, gemstones settings, limited edition, specific market requests and so on. Some of the pieces became so rare that it skyrocketed the price and the rarity led to a Glamorous Day-Date auction with Aurel Bacs as the master of ceremony. 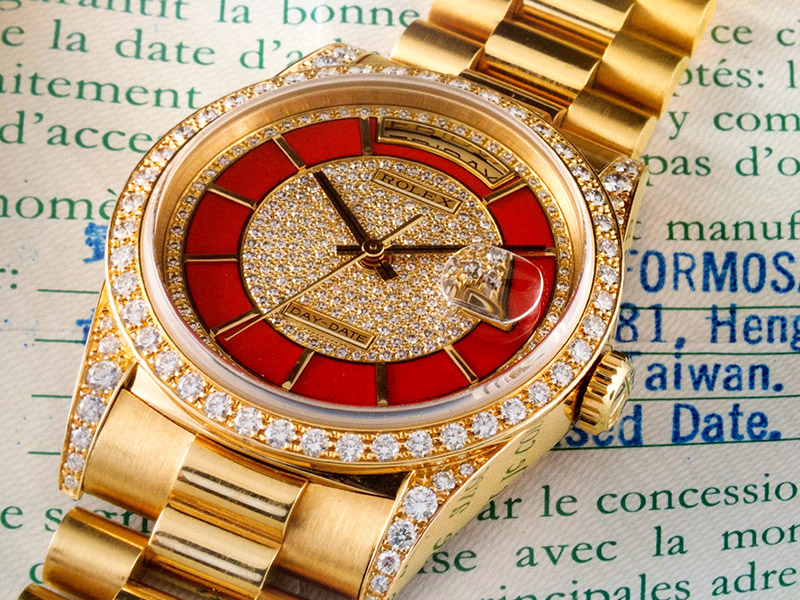 The show must go on…

The first Day-Date reaching CHF 100K was Lot #10 was a special order from the Sultanate of Oman by Asprey. A 1975 ultra-rare Rolex with diamond indexes,a blue dial and the red Omani emblem with the important 1802 reference.

The pace accelerated with the Flaming Sword- Lot #12, as the original piece was ordered by the Sultanate later belongued to an important European collector. When the piece reached the CHF 100K, a new bidder entered the game… and Bacs made the assembly laugh, selling “to this warrior” in a round of applause the red dial paved with diamonds on the bezel for CHF 155’000 – estimated between CHF 40’000 and 80’000.

Now used to the over CHF 100’000 price, the Octopus sapphire – Lot #13 raised interest when the bidder in the room fought against the telephone bidder at over CHF 120’000. Then, Bacs started a conversation with his wife in Italian… “Are you happy?” he asked her, while she was still on the phone discussing with the client. The key player in the room raised the bid… “Livia, you have fierce competition,” he told his wife facing a laughing assembly waiting for the outcome. The piece sold eventually sold for CHF 140’000.

An important collector always bidding with the 88 number … acquired Lot #16 managed to acquire the Day-Date Oyster quartz with baguette rubies on the bezel and brilliant cut diamonds set within the links of the bracelet for his lucky number.

The Brooklyn Bridge made of a platinum case and geometric lines engraved on the dial with a diamond setting on the bezel and hour markers estimated between CHF 50’000 and CHF 100’000 reached CHF 250’000 in a muscle game, Bacs seemed to be amused to play. 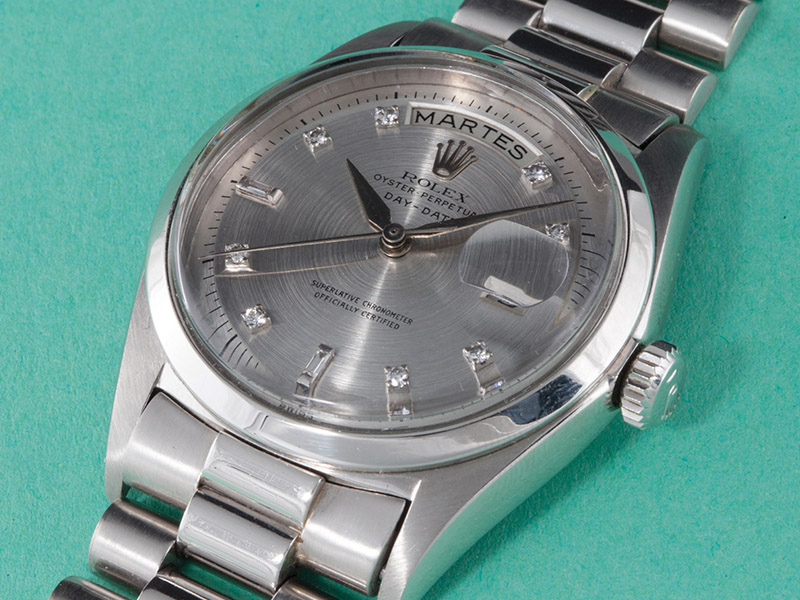 The 88-bidder was back on tracks acquiring Earth (Lot #28) a rare combination of colors with emerald baguettes, diamond and a champagne dial.
Later on, the Tangerine Rolex (Lot #32) with the center of the dial paved with diamond within an orange exterior lacquered dial set yellow gold was bidded for CHF 88’000. “How could I forget you!”claimed Bacs, amused, “I think we have a new currency for the Day-Date.” Everyone laughed.

Instagramers are posting live images unleashing passions on the web… Comments, smileys, re-posts, Mr. Bacs isn’t only active on his podium highly lauded when he reached Lot #43, Rolex made for the luxury market only. The Big Kahuna from 1958, a historically important piece worth 300gm of platinum he sold under thunderous applause for CHF 390’000 after an escalating bid recorded by the majority if not all of the smartphones of the audience holding breath.

If that wasn’t emotional enough, Bacs presented Lot #51 as “a piece of emotion” made for the middle-eastern market only in 8 pieces worth 300gm of platinum. The heaviest Rolex Day-Date made to this day.

Two lots before the end, the Taxi Driver estimated between CHf 40 and 80K scored at CHF 225’000 with a vivid yellow lacquered dial, super rare and that was not a tremendous success in Europe when it launched ! Bacs proved the opposite.

With a staffed team of fifteen people hung onto their phones and 75 people with as many desks and phones in the back office hour Aurel Bacs, took an hour and forty minutes on a Saturday early evening to sell sixty vintage Rolex Day-Date reaching CHF 6’179’400.Part One done. Not bad for a first run, congratulations Mr. Bacs. 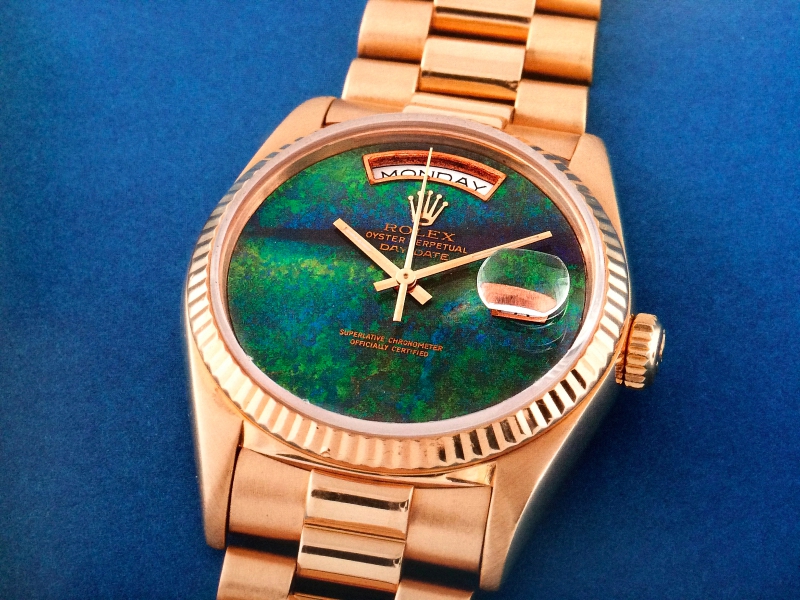