No matter how absurd it may sound: this title is nonetheless true. Last summer, during my Burning Man journey across the Nevada desert I was wearing a Corum timepiece when I met with famous actor Gerard Butler. If some call it serendipity I like to think it is destiny. 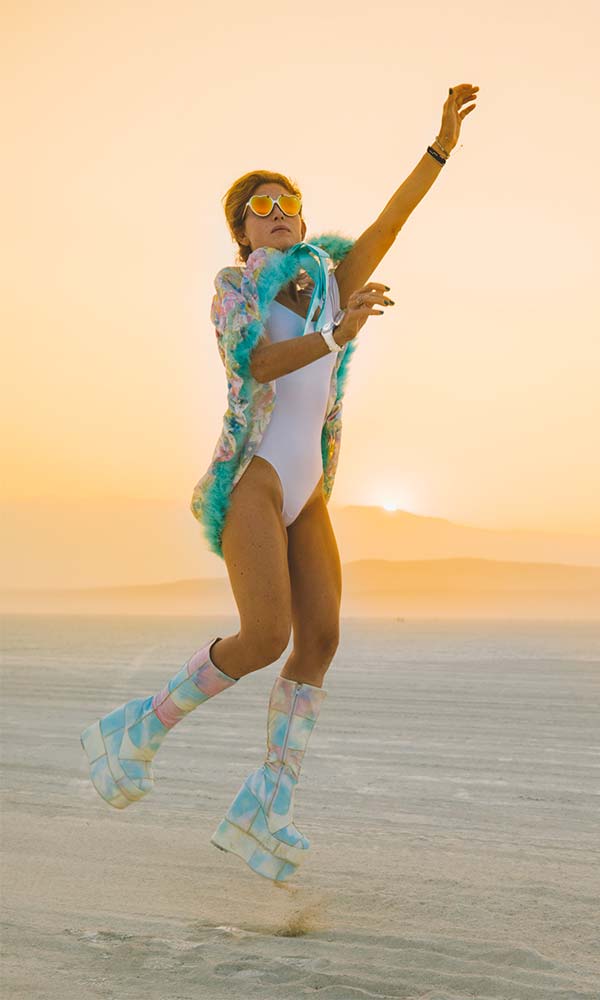 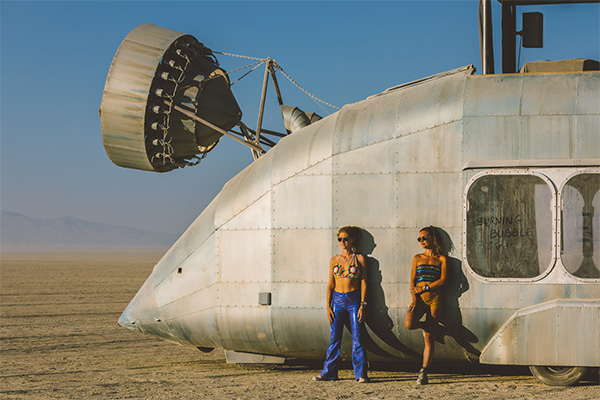 Spending a day with a Bubble watch only for its design rather than its horological function emphasized the fact that I had landed in a place where the notion of time did not matter. I realized that wearing a watch in the middle of the Burning Man desert did not serve me right. When the dial of my Bubble somehow indicated that the sun was shortly going to bed and so should I, I escaped to follow the dust in the sound of music … One day, I landed in a mystical place where dozen of people covered in sand were praying hand in hand around a sacred table. Candles were lit up and placed in hand-crafted candle jars; large and colorful cushions were placed on the floor for everyone to sit; in an instant, the large piece of wood that served as a table was covered with chandeliers and flowers. Music was coming from afar leaving only the sound of serenity penetrating my dusty yet spirited body. That specific moment I looked like a unicorn that had cuddled with Leloo from the Fifth Element. Wearing a white leotard with a pastel and glittery cape lined with blue fur matched with perfection the 20-cm high fake leather boot wedges and the 42-mm white Bubble set with a white mother-of-pearl dial and SuperLuminova hours hands and markers… ideal to get a light source in the middle of nowhere, if you ask me.

It was getting dark and I was getting hungry. The thought of riding my bike to get to my RV (Recreational Vehicule) to cook myself some dinner was inconceivable. But because Burning Man is a magical place – we have already talked about this – food started appearing from God only knows where. Without realizing it, I was attending a traditional Shabbat dinner in the middle of the desert under a makeshift tent with wine (not sure it was Kiddush), challah bread, inspired thoughts and definitely no light nor driving or working! I poured some wine into my neighbor’s cup, his name was Peanut Crunch while I accepted the offer of Kitty Catie who filled my glass with lemon infused water. She was meowing every 20 seconds to express her happiness and gratitude. I looked at my watch only to realize that 20 minutes had passed since I had arrived. The SuperLuminova on the hour hands was so bright that it drove the attention of a man with a 5 o’clock shadow beard who asked if I happened to be more interested in his chicken skewers than wondering when my next hypothetical meeting was next.

He was covered in sand, the wrinkles on his tanned face were highlighted by the white dust of a playa storm and yet, despite his leather skirt and military boots he was utterly sexy.

Partially bare chested, his muscles were contracting each time his was moving his chicken tray passing it along the guests. Strangely enough, his body looked more familiar than his face. At the sound of his voice I realized that my chicken waiter happened to be Gerard Butler whose muscles in fact came from paddling on his surfboard in Chasing Mavericks or fighting 300 a few years back. I was torn between asking him some mustard or talking him into shifting watch brand as an ambassador lending him my Bubble for a try-out. He would then realize how ergonomic the watch was. Not to mention that its automatic movement has a 72 hours power reserve hidden in a case diameter available in 42, 45 or 47-mm with a diversified offer of dials. Disco ball, camouflage or customized, Gerard Butler could even imagine his own BM dial. Maybe now was not the time nor the place. Instead, I said “merci pour le poulet” hoping that he’d catch that I was just like him a creature from the other side of the Atlantic and whispered, PS. I Love you …