Tourmalines come in many colors. Some are more rare than others. Some can be an alternative to a more expensive gem. Nonetheless, watermelon tourmalines are not so rare and quite affordable. Explanations.

As a matter of fact,  tourmalines stones can be found in a wide range of purples, blues, pinks, reds and greens, but perhaps the most fun is the multi-colored watermelon tourmaline. As the name suggests, this gemstone goes from green to white or red echoeing the juicy hues of a watermelon fruit. First discovered in Maine, in the United States in 1902, the watermelon tourmaline has created quite the craze in the jewelry market.

All tourmalines are the result of crystals of boron silicate mineral mixed with other elements such as aluminum, iron, magnesium, sodium, lithium or potassium. This semi-precious stone has 11 different species, which are divided due between their color and their composition. Elbaite species are those with reds, greens, blues and colorless features. The watermelon tourmaline is part of the Elbaite species.

Tourmalines are formed in areas where volcanoes have produced magma. This magma is cooled, with large empty cracks. The cracks will then be naturally filled with water and minerals such as iron, lithium or magnesium. Overtime, these will then turn into crystals of tourmaline or other gemstones. The specific trace elements are what gives each gemstone their specific coloring. Magnesium can bring about reds, pinks, browns or yellows, while chromium can cause green. Lithium can produce multiple colors at once, such as green to red or yellow to pink. A single tourmaline can have many colors at once, even up to 15!

The watermelon effect is caused when trace elements change during the crystal’s growth, by concentration or composition. The crystal will start out as red but then end up growing into green. This type of tourmaline can be found in Brazil, Nigeria, Madagascar, Afghanistan or even in the United States.

Designers will sometimes slice watermelon tourmaline, instead of facet it, in order to enhance the watermelon effect. 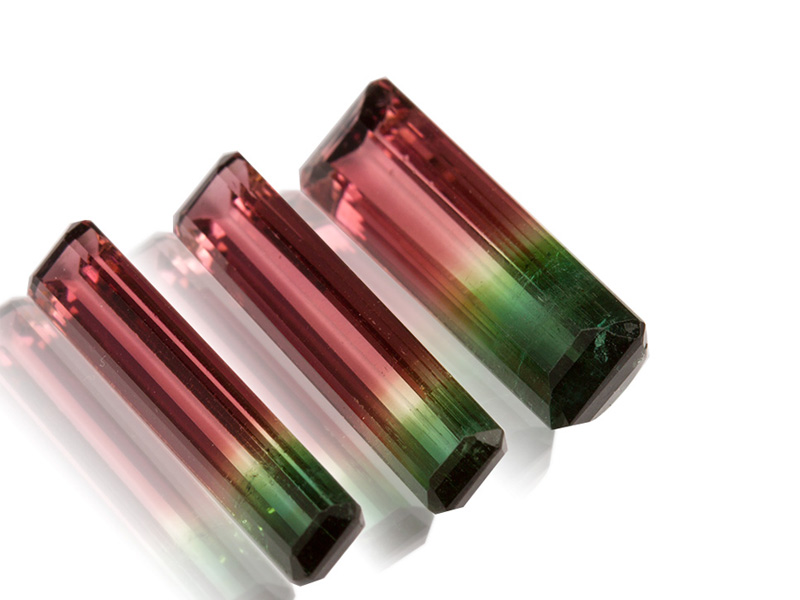