First of all, a Ruby is a precious stone whereas the Rubellite is a rare gemstone. The Rubellite is a multi-faceted gemstone varying from a tender pink color to crimson red with pinches of purple where Rubies offer deep red tones only. If rubellites are rare, rubies have been considered to be one of the most valuable gemstones on Earth.

What is a Rubellite ?

The rubellite is a multifaceted gemstone with a color range from tender dramatic pink to ambivalent violet and crimson red. It is highly prized and priced due to its rarity and unique beauty. The rubellite is a transparent gemstone from the colorful family of the tourmalines. Its color can vary from red to violet to pale and dramatic pink. Its name comes from the Latin word “rubellus” which means reddish. It is the most prized and expensive member of the tourmaline family because of its beauty and rarity. Rubellites are one of the few stones, where the presence of inclusions is actually a benefit. Mainly found in Brazil, Madagascar, Mozambique, Nigeria and Pakistan, a genuine rubellite does not change its color depending on the light source. Because of its deep rich color, the gem is compared to the magnificent ruby, but the difference between a ruby and a rubellite lies in the structure and intensity of color. Rubies have a higher density and a richer red undertone, but rubellites are rarer. That makes them more expensive as well. Another striking quality of the red tourmaline is that it’s pyroelectric, which means that upon heating the stone becomes electrically charged. It can be cut in several ways, but in keeping with the intensity of the color. Due to its crystal structure, most rubellite stones are imperfect to some degree.

Rubellite Tourmalines are available in any cutting and style and they make for beautiful rubellite ring compositions together with other precious stones. High quality natural red tourmalines are increasing in value and popularity. The tone of the gem is of great importance as it determines whether it can be classified as a rubellite – most pink tourmalines aren’t saturated enough in tone or color to qualify. Rubellite tourmaline rings are particularly sought-after as they wear well in almost any type of jewelry. 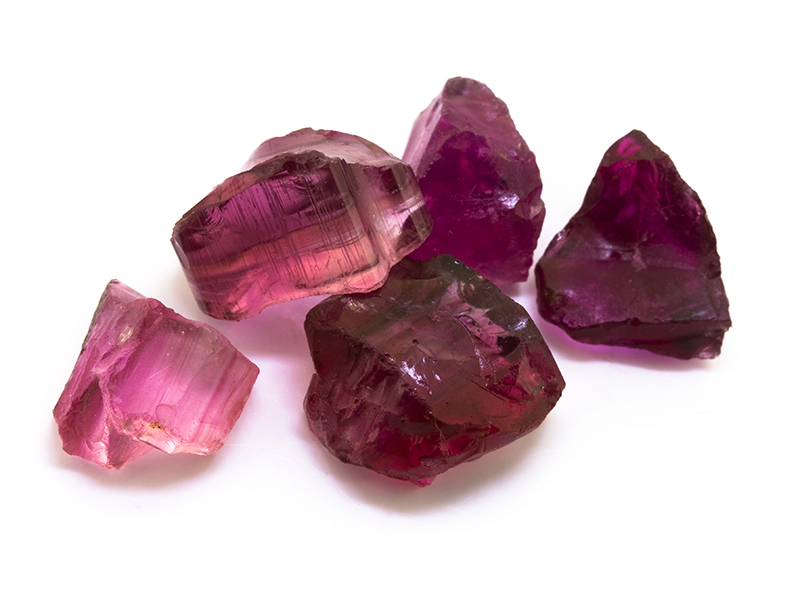 The Ruby is considered to be the king of precious stones. It is a gem that outshines all others in qualities and essence. From its deeply rich red tones to brilliant shine – the ruby has been considered one of the most valuable gemstones on Earth.

Originating from the Latin word ‘to ruber’, the ruby is the red variety of the mineral family of the corundum. Its color is caused by the presence of chromium oxide. As pure corundum is colorless only red corundum can called ruby, with all other color variations being classified as sapphires. It has become less and less easy to find unheated Rubies on the market.

Valuable and rare, the market value of a ruby depends on several factors: its dimensions, its color, its purity and its cut. Every ruby naturally possesses inclusions and only rubies made of synthetic materials can give the impression of being flawless. The more these inclusions are rare and minor, the higher the value of the gem is. And that is true for every stone. Burmese rubies were given the name of “King of precious stones ” or ” First one of all precious stones.”

A Ruby offered on the 35th wedding anniversary marks the opulence and majestic beauty of the stone symbolizing security. Evocative of blood and fire, the ruby is naturally associated with courage. Setting a ruby is the royal badge, which kings adorn their crown or their helmet with as a symbol of their absolute power. The Burmese Ruby is believed to protect knights in battle.

The Blood Pigeon ruby is associated with passion and thought to calm and protect from temptations. It is a symbol of victory, compassion and love stimulating energy, vitality and sensuality. Considered to be one of the most valuable gemstones on Earth, the unheated ruby contains elements such as chrome, iron, titanium or vanadium. On the Mohs scale of hardness, the gem is second only to the diamond. Stones of more than 3 carats in size are extremely rare to come across, which determines their top prices at auctions, surpassing even those paid for diamonds in the same category. The value of each gem is usually determined by the beauty and attractiveness of the color as well as the transparency.